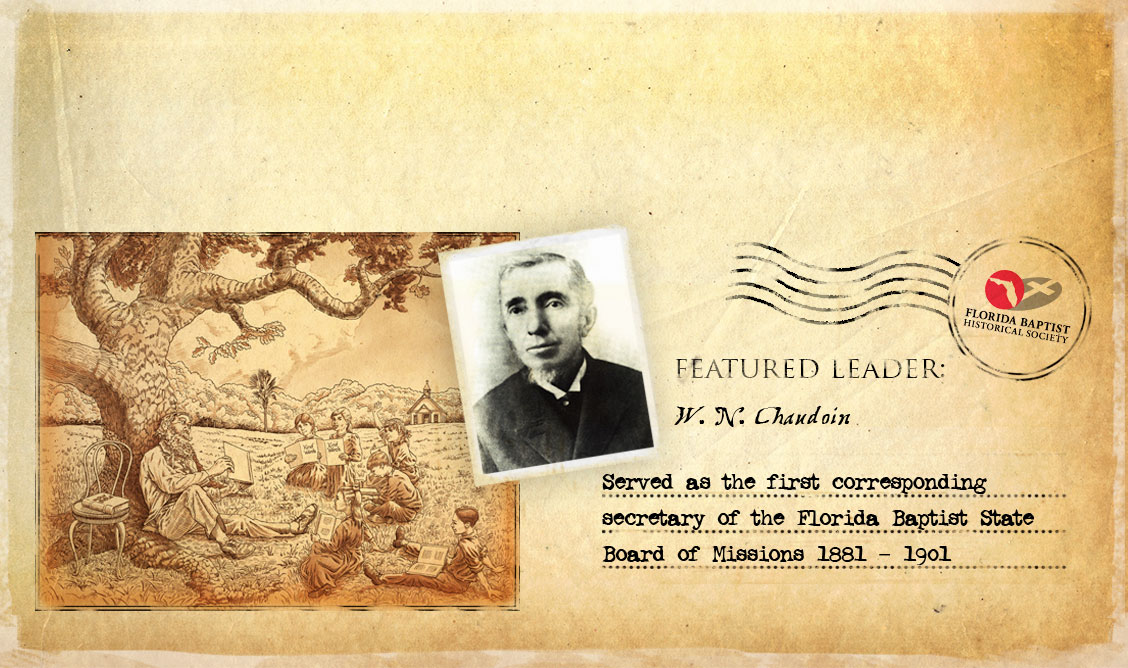 William Newell Chaudoin (1829 – 1904) was oftentimes referred to as the “Father of the Florida Baptist Convention” in that he was the first chief executive and the founding leader of the State Convention’s State Board of Missions.

Affectionately known as “Uncle Shad,” William N. Chaudoin was a common, unassuming man who became recognized for his devotion, faith, energy, tact, skill and constructiveness in leading Florida Baptists into the Twentieth Century. Chaudoin brought hope and encouragement to a struggling state-oriented denomination that was still seeking to defined itself and financially support its missions’ dreams. He accomplished this in his role as the first corresponding secretary for the State Board of Missions of the Florida Baptist State Convention. It was a tenure that lasted 21 years 1880 – 1901), and during which Chaudoin set benchmarks for church starting, missions giving, and nurturing ministerial education.
During Chaudoin’s two decades of leadership, Anglo Florida Baptist churches doubled to number 468 with a combined membership of 23,136. This growth was the result of Chaudoin’s personal priority to lead Florida Baptists to plant churches in areas where Florida’s population was burgeoning. Initially undertaken with two missionaries, the church starting effort soon developed into a growing troop of nearly 40 State Board of Missions’ appointed missionary-pastors.
Most contemporaries would have expected that it would have required a persona of bold aggressiveness and assertiveness to lead the fledgling Baptist denomination. Yet one biographer described Chaudoin, as a “plain, unaffected humble man, making no high pretensions of any kind.” It is evident that it was Chaudoin’s ability to quietly, yet firmly encourage and cajole others to do the spiritually right thing, which made him an effective servant leader during the final two decades of the Nineteenth Century.
Born August 20, 1829 on a farm in Robertson County, Tennessee, William Newell Chaudoin was converted to the Christian faith before he was sixteen. Two years later on April 2, 1848, he preached his first sermon. Soon thereafter his home church licensed him “to exercise his gifts in public.” In 1851 he was ordained to the ministry by the Charity Baptist Church, which was located outside Nashville, Tennessee. Chaudoin did not pursue a formal education beyond high school. Many years later, Chaudoin reported to the Florida Baptist State Convention, that he had “an opportunity of attending college, did not embrace it, and has had a life time to regret it. Education makes any man more efficient.” To his credit, Chaudoin did have the commitment for reading and independently pursuing a variety of studies including the Bible and theology. And it could be assumed that Chaudoin’s lack of a formal education in later life made him more sympathetic and sensitive to the needs for a trained clergy in Florida.
At age 21, he married Caroline Frensley in May, 1850. Although the couple never had any children, “Uncle Shad” and “Aunt Carrie,” as they were often called, enjoyed 54 years of marriage before his death at age 75 ended their lives together. Surprisingly, Chaudoin’s long lifespan far exceeded the expectations of close friends who knew of his fragile health condition. A pulmonary infection contracted several years after he married, plagued Chaudoin for the rest of his life. When first assessed by a doctor, Chaudoin was told the seriousness of the condition would make him an invalid, “and his friends thought he would soon pass away with tuberculosis.” While the illness did not stop him from faithfully pursuing God’s leadership in ministry service, it did become a reason for his later re-location to Florida.
Prior to coming to Florida, Chaudoin served as pastor of Second Baptist Church, Nashville. He later accepted an invitation to serve as an agent for the Bible Board of the Southern Baptist Convention in Middle Tennessee and North Alabama from 1856-1857. Due to his ill health, Chaudoin moved to Southwest Georgia where he served as principal of the Georgia Academy for the Blind for one year. He was pastor of several churches in southwest Georgia from 1865-1870, and preached to the Confederate troops in Virginia during the Civil War. In 1870 he became an agent with the Southern Baptist Convention’s Domestic and Indian Board. In 1871 he was promoted to District Secretary for Georgia and Florida.
Again due his health problems, Chaudoin moved to LaGrange, Florida, in 1880, and purchased a small orange grove. Chaudoin served as president Florida Baptist State Convention from 1880-1903, with the exception of 1886-1888, when H. M. King served as president. Chaudoin also served as trustee of Stetson University from 1886-1903. It was in 1893 that Chaudoin received the first honorary Doctor of Divinity degree that Stetson gave. He died January 22, 1904.
Primary and Secondary Sources: William N. Chaudoin Diary, 1858-1859. Minutes, Florida Baptist State Convention, 1875, p. 29; 1889, p. 17. Minutes, Florida Baptist Association, 1860, p. 2. E. H. Reynolds, Sr., “William Newell Chaudoin,” Florida Baptist Witness, January 27, 1904, p. 9. “W. N. Chaudoin,” History of Baptist Denomination in Georgia with Biographical Compendium and Portrait Gallery of Baptist Ministers and other Georgia Baptists, p. 121. John T. Manning, “Chaudoin Family History,” unpublished manuscript, Titusville, Florida, no date, no page.