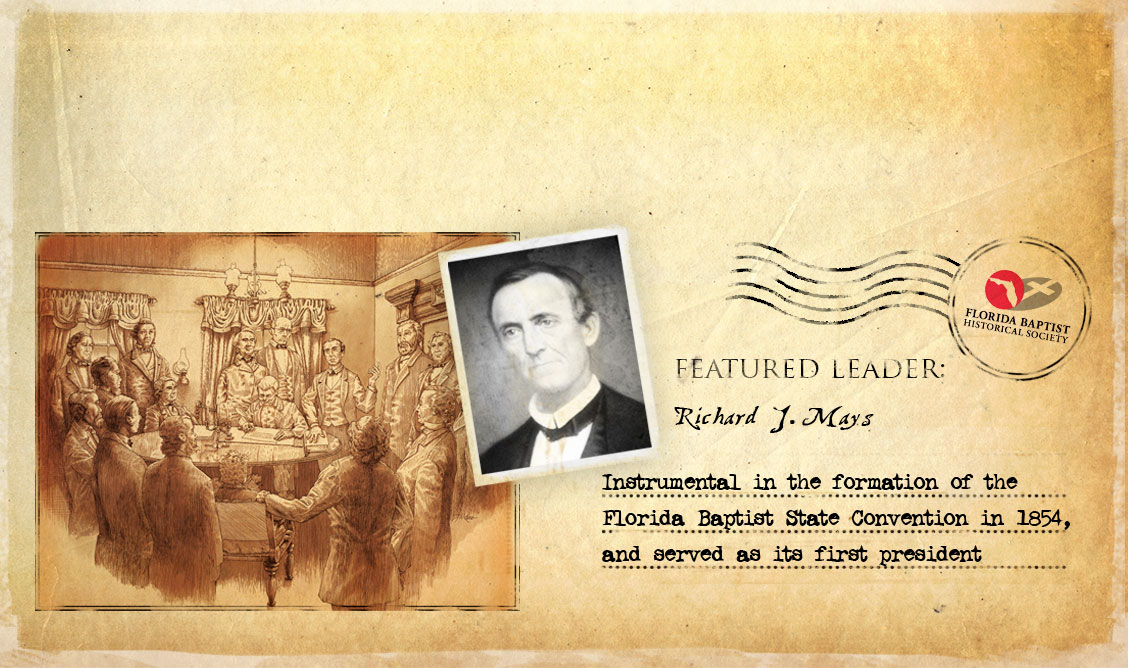 Richard Johnson Mays (1808 – 1864) holds the distinction of having led the effort to organize the Florida Baptist State Convention in 1854, after having been an active church starter and participant in the formation of the Florida Territory’s first Baptist association.

Mays and his wife, Eliza Williams Mays, migrated around 1830-31 to Middle Florida from the Edgefield District, South Carolina. Mays was 21 (b. January 22, 1808) and Eliza was 14 when they married in 1829. When they moved to the Florida Territory, they initially settled near Lake Sampala in the southern part of Madison County. During this period their first daughter died.
In about 1833 they moved to the northern end of Madison County and established the Clifton Mansion. In the ensuing years, the couple had eleven other children of which seven survived to adulthood. Mays acquired large holdings of farm and timber lands and became an imposing figure as a religious, civic, and cultural leader. By 1860 Mays owned 5,480 acres of land and had 120 slaves. To provide for the educational needs of his children and his neighbors, he established Mays Academy on his plantation.
Richard Johnson Mays was a spiritually committed layman who was involved in starting churches and whose spiritual pilgrimage led him to be ordained to the ministry. In 1831, the Mays joined several other families to start the Hickstown Baptist Church, the forerunner to the current First Baptist Church of Madison. Even after his move to the north end of the county, Mays continued to attend and hold leadership positions in the Hickstown Church. Mays briefly served as a lay-preacher for the Elizabeth Baptist Church (Jefferson County), near Monticello between 1832-34.
Recognizing the need for a church in the north end of Madison County, Mays joined with other settlers and on June 20, 1841 they organized the Concord Baptist Church. He donated 20 acres of land for the church site. Also at his request, the church first ordained Mays as a deacon and six months later (October 1841) ordained him to the pastoral ministry. He served on two separate occasions as pastor of the church.
Over the next 15 years, Mays provided a guiding hand in the organization of the Monticello Baptist Church in 1841, the Liberty Baptist Church (Brooks County, Georgia) in 1843 and the Piney Grove Baptist Church in 1856.
As Baptist pastors and laymen recognized the need for fellowship and the moral support of churches working together, Mays was among the church delegates that organized the Florida Baptist Association in 1843. This was the Florida Territory’s first association of missionary Baptist churches.
Subsequently, on November 20, 1854, Mays hosted 17 delegates from the then three existing missionary Baptist associations in Florida to meet in his home, Clifton Mansion to discuss the formation of a Baptist state convention organization. The Florida Baptist State Convention was formed and subsequently Mays was elected president of the new entity.
In addition to spiritual matters, R.J. Mays was involved in civic responsibilities. In 1838, Mays served as a delegate to the constitutional convention that met at St. Joseph to frame the constitution that provided the organizational framework for the State of Florida in 1845. He also served as the Madison County postmaster from 1835 to 1838. In 1837, Mays was appointed as a justice of the peace. And as a loyal Southerner, he provided supplies and several sons to support the Confederate cause during the Civil War.
He died at Clifton on July 18, 1864.
Primary and Secondary Sources: Patty Mays, “Richard Johnson Mays, Pioneer, Preacher, Patriot.” Madison County Historical Society, Second Annual, 1941, p. 26-27. Larry E. Rivers, “Madison County, Florida – 1830 to 1860: a case study in land, labor, and prosperity.” The Journal of Negro History, Vol. 78, 1993, p. 233ff. Elizabeth Sims, The History of Madison County, Florida. Edwin B. Browning, Sr., First Baptist Church, Madison, Florida, 1956 edition. Gordon Crawford Reeves, A History of Florida Baptists, unpublished dissertation manuscript, pp. 20-21. Earl Joiner, A History of Florida Baptists, p. 24. Florida Baptist Historical Society files.