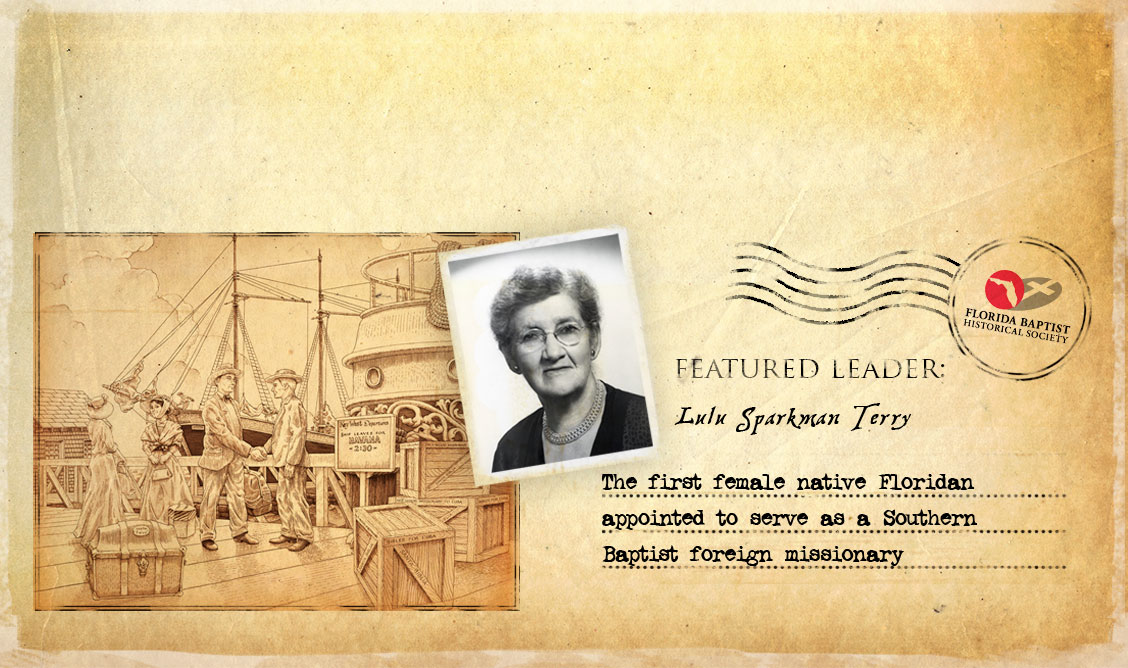 Lulu Sparkman Terry (1887 – 1965) holds the distinction of being the first woman and second native-born Floridian appointed to serve as a missionary appointed by the Southern Baptist Foreign Mission Board.

Born at Wauchula, Florida on May 27, 1887, Lulu Sparkman was the daughter of Thomas J. Sparkman and Susan E. Futch Sparkman. Her father was a pioneer Baptist minister in south Florida and her mother a housekeeper. In addition to Lulu, the Sparkmans had six other children, including two daughters: Mary (1878) and Maude (1882); and four sons: Hugh (1880), Walter (1884), William Carey (1891), and Charles Spurgeon (1894).
Lulu Sparkman was converted in 1898, and baptized in the Peace River at Arcadia. She was raised in Wauchula, Punta Gorda, Arcadia, Nocatee, Owens, Deland, and Lakeland, places where her father served in new pastorates. She attended Stetson University, and the W.M.U. Training School in Louisville, Kentucky. She became interested in mission work in Latin America at an early age.
At age 23 Lulu Sparkman graduated from the WMU Training School (now merged with The Southern Baptist Theological Seminary) in Louisville, Ky., with a bachelor of missionary training degree in 1910. While a student she met and became engaged to Adolph John Terry (b. July 5, 1883). At year later when Terry completed his seminary studies, the couple married on June 8, 1911, at Palmetto, Florida. They were appointed to serve as missionaries to Brazil, South America in July 1912.
After a year of language study, the Terrys, moved to Teresina in the state of Piaui to begin their evangelistic work. At that time only two Baptist churches, 500 miles apart, existed in the entire state. The only mode of transportation was on mule back or river craft. Within five years, the Terrys had helped quadruple the number of churches in the state by leading in the establishment of six churches. Wherever the Terrys traveled, despite the lack of modern means of communication, their reputation as Christian evangelists preceded them. They were often asked spontaneously to share their faith or hold worship or baptismal services. Always, they were humbly amazed at the eager activity of the native Brazilians to further the Christian witness.
In 1919-20 the Baptist Industrial Institute (Instituto Bautista Industrial) was established in Corrente, deep in the interior of Piaui, the very area to which the Terrys had sensed a calling from God less than a decade earlier. For the next ten years the Terrys served in central Brazil. In 1931 A. J. Terry’s declining health required that they leave the high, dry plateaus of central Brazil. They were assigned to the coast, where they served at different times the Baptist schools in Recife and Rio de Janeiro. In 1936 the couple moved to Vitoria, in the state of Espirito Santo, where they did general evangelistic work. Lulu Terry organized a Baptist Training Union in the First Baptist Church of Vitoria, perhaps the first Training Union in all of Brazil.
While on furlough in the United States in 1945, A. J. Terry died. Undaunted by the personal tragedy Lulu Sparkman Terry returned to Brazil to carry on her missionary service in Brazil until she retired in 1957 after 45 years of service.
They had two children, both of whom were born in Recife, Brazil: Daniel (1912) and Susan (1917).
Primary and Secondary Sources: Lulu Sparkman, personal letter to the Southern Baptist Foreign Mission Board requesting an application for missionary appointment, dated Dec. 28, 1910. Margaret Johnston, “Her Heart Is in the Heart of Brazil,” The Commission, (September 1957), pp. 247-248. Elizabeth Provence, God’s Troubadours. Eula Tucker Lastinger, The First One Hundred Years, pp. 70-71. Florida Baptist Historical Society files.