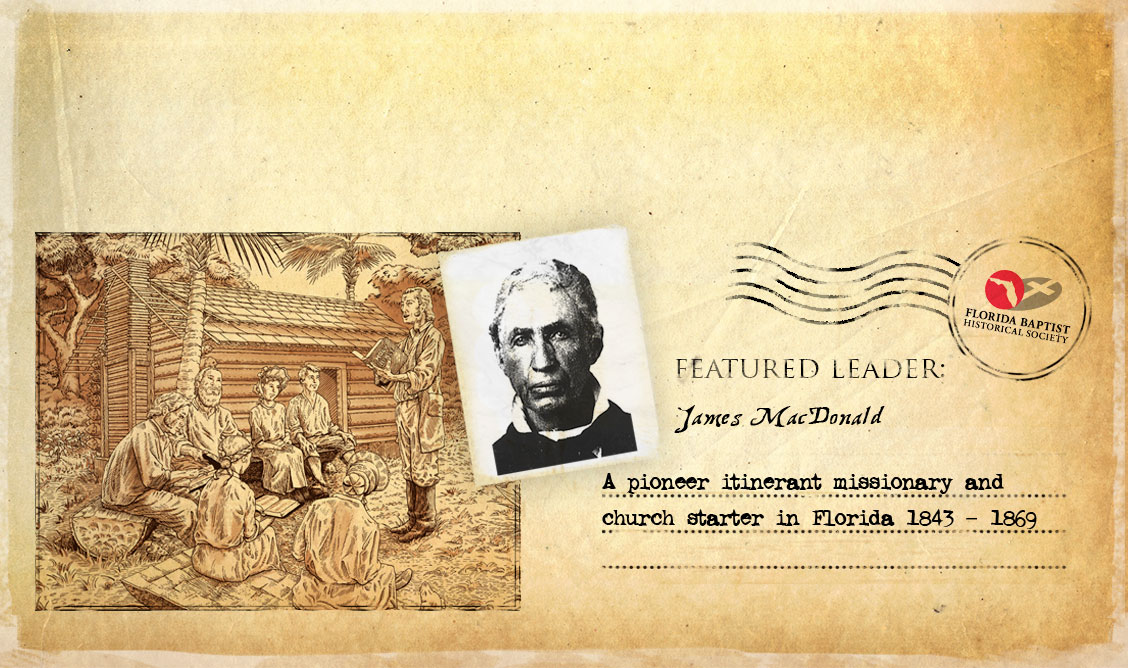 James McDonald (1798 – 1869) was one of the earliest pioneer itinerant missionaries to travel the Florida Territory preaching the gospel and starting churches.

Born 1798 in Limerick County, Province of Muster, Ireland, McDonald was seven years of age when he witnessed the hanging of his father and fourteen relatives for their participation in the Irish rebellion. He was then raised and trained to be a Catholic priest. After exacting revenge upon a fellow countryman for his false testimony against his relatives, James fled to America. He decided to enlist as a soldier in the Spanish Army in the Cuban conflict of 1829. He was unjustly arrested as a spy for England and placed in Moro Castle to await a firing squad. In desperation he knelt and asked God to save him while awaiting his execution.
A friend from Norfolk visiting in Cuba brought about the near miraculous release of McDonald. He determined to become a Baptist after reading and studying the Bible for three months. McDonald made his way to Georgia where he was baptized into a Baptist church. He later was licensed to preach by the Richland Creek Baptist Church. Beginning in 1832, McDonald was appointed by the Georgia Baptist Association to serve as a missionary to Burke County and eventually was appointed as an itinerant missionary by the Sunbury Baptist Association. While traveling his ministerial itinerary, McDonald read an article that appeared in the July 7, 1836 issue of The Christian Index, the Georgia Baptist news journal. A Baptist layman, Edwin Hart, appealed to preachers of the gospel to come to Florida. “If there is any country in these United States that stands in need of preaching, it is Florida. We are all most destitute of preachers.” It was as if the Spirit of God had issued a “Macedonian” call. In quick order McDonald secured the approval of the Sunbury Association for him to travel to East Florida in April 1837.
In his regular report to the Georgia Christian Index, McDonald reported in a November 5, 1838, article that he had managed to start three new churches. One of those congregations was the Bethel Baptist Church in Jacksonville, at which he and Ryan Frier served as the presbytery. Started in July 1838, the church had six charter members. Within a year, missionary McDonald reported that his preaching circuit involved regularly preaching at 17 congregations of which seven he served as the pastor. One of those congregations was the Sharon Baptist Church in Nassau County. He helped organize the church in early 1841, with fourteen members. Eventually the town of Callahan grew up around the church, and in 1857 the church changed its name to the Callahan Baptist Church. Although McDonald later settled in Jacksonville, he traveled regularly to the Sharon Church for 13 years and nine months to fulfill his pastoral functions.
While continuing his unpaid pastoral duties, McDonald was employed by various associations and mission sending entities to minister in the Florida Territory. Initially, in 1841, he was employed by the American Baptist Home Mission Society to replace itinerant missionary O.T. Hammond. After a year of service with the Mission Society McDonald resigned and accepted an invitation to serve as an itinerant missionary for the recently organized Florida Baptist Association. He held that responsibility for about two years -- from 1842-1844. When the Southern Baptist Convention was organized in 1845, McDonald was employed by the Convention’s Board of Domestic Missions and served as a missionary for two years. McDonald often ministered to a mixed and unresponsive population of Spanish Catholics, universalists, skeptics, moral renegades, and African-descendents. As a result of the churches he organized and served as pastor he led in organizing in 1847 the Alachua Baptist Association and then was elected to serve as its first moderator in 1848-1849.
McDonald is credited for having published in 1848 the first Baptist newspaper in Florida. He called it The Baptist Telegraph and Florida Emigrant. Despite being able to maintain the publication for only a few months, the effort reflected his awareness of the need for a newspaper to advance the work of missions.
McDonald married Teresa Amanda Pendarvis of Duval County on May 15, 1842. They had eleven children, eight of whom survived.
Toward the end of his labors in Florida, McDonald lamented that in East Florida, in an area 200 miles long, there were no more than five ministers. In 1853 he reluctantly resigned as pastor of the Sharon Baptist Church in Nassau County and returned to Georgia, where he subsequently died on April 25, 1869.
Primary and Secondary Sources: Rome (GA) Mirror, January 26, 1896. James C. Bryant, “James McDonald: Missionary to East Florida,” unpublished manuscript. Southern Baptist Missionary Journal, 1849. History of the Baptist Denomination in Georgia with Biographical Compendium, pp. 374-375. Minutes, Florida Baptist Association, 1845, p. 8. Belton S. Wall, Jr., A Tale To Be Told, pp. 115-117. Minutes, Alachua Baptist Association, 1848, pp. 1, 6. First Baptist Church Callahan, A Brief History.